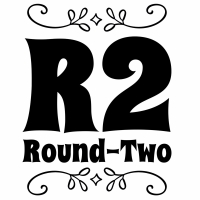 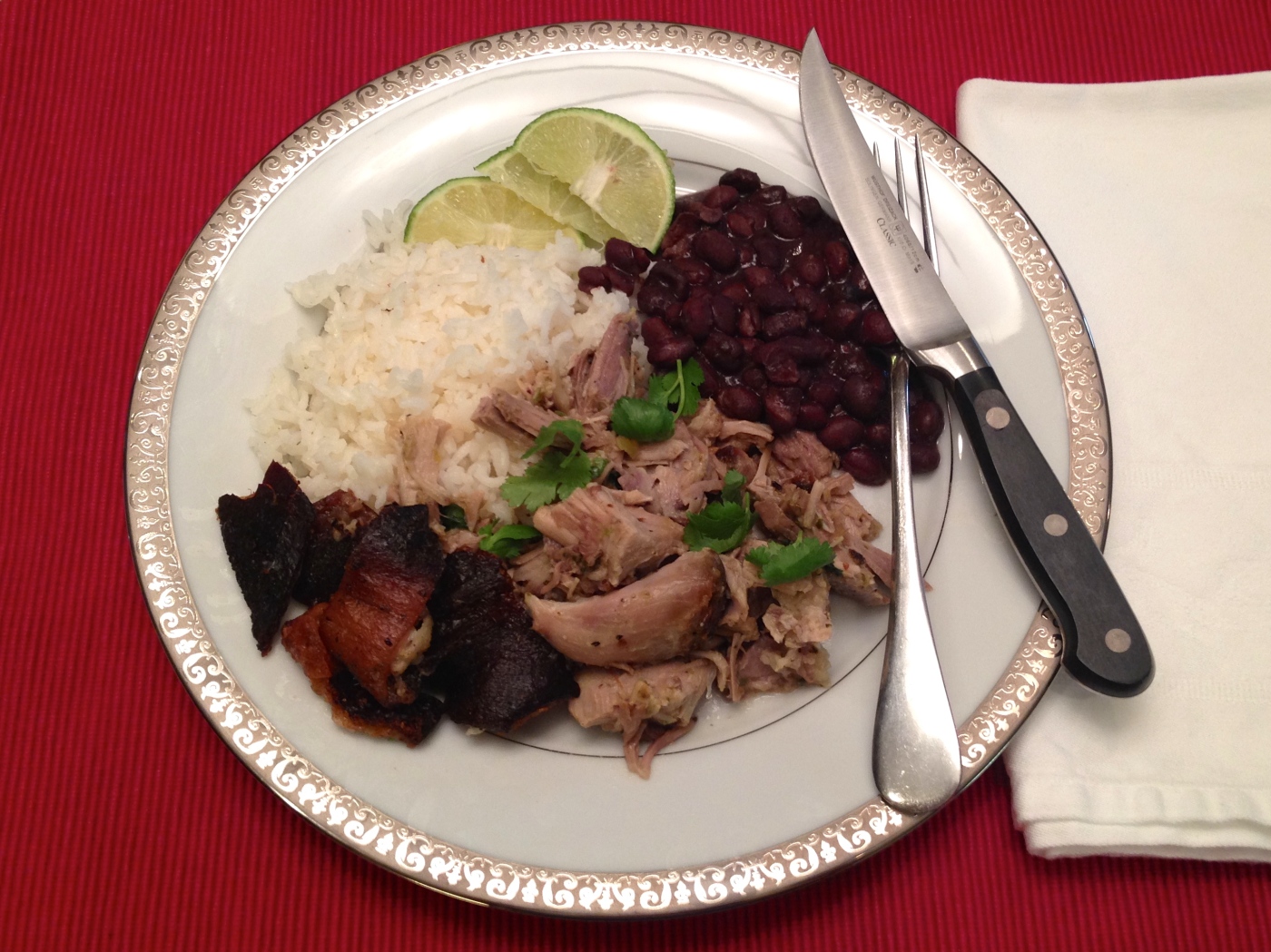 Things are really coming together at my new place. Best of all, I finally have Internet! However, I spent most of my time with my mom at her place over the weekend. We had a blast cooking together for this week’s post, watching old movies, and enjoying a few mimosas during the process. I hope you all had a wonderful time with your mothers this weekend as well!

Now, I can’t speak for everyone out there, but pork is one of those culinary delicacies that I can never get enough of. Roasts, chops, sausages, tenderloins, bacon, prosciutto: you name it. Pork products are my tasty, tasty kryptonite. So, it seemed only proper to feature a glorious roasted pork recipe in one of my first posts. 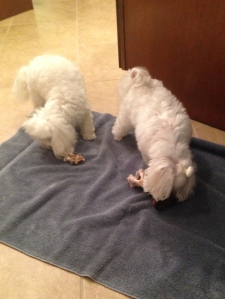 Lilly and Dixie got to enjoy some of the pork bones after all our hard work was over!

Although this slow-cooked dish takes a number of hours to marinate and roast, the recipe is fairly simple. Personally, I love things that I can prep ahead of time and then just pop in the oven. I adapted this pernil recipe from Cook’s Country, and it turned out fabulous. This would also be ideal for a summer get-together since it is affordable and easily feeds a crowd. Although the crowd that enjoyed this roast consisted only of my mother, myself, and our two spoiled Maltese pups.

Here is a bit of background on Pork Pernil:

Pernil is traditionally cooked using a fresh ham from the rear of the pig. However, this recipe (and most out there, it seems) calls for a pork picnic shoulder. The meat is marinated for at least 12 hours, cooked low and slow initially, and then at a higher temperature to crisp the skin. The bones, connective tissue, skin, and fat in this cut will all contribute to intensifying the decadent pork flavor of the meat and pan drippings. Essentially, using smaller and easier-to-find cuts of the hog helps you to replicate a full-blown outdoor pig roast in your oven. 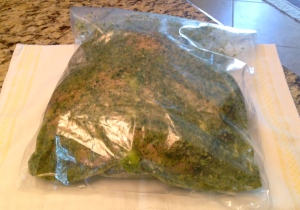 I love the bright color of the sofrito marinade!

Particularly popular as a Christmas dish in Puerto Rico, pork pernil is seasoned with traditional spice blends such as adobo and/or sofrito and served with rice and pigeon peas. Like any dish, preferred seasonings can vary widely from country to country, region to region, and family to family. Adobo is the Spanish term for a marinade or dressing that is comprised of herbs and spices—usually with a base of garlic, oregano, and black pepper.1 Sofrito is another popular staple in Spanish, Latin American, and Portuguese cooking. The ingredients in this flavorful base are typically lard or oil, onions, various kinds of peppers, cilantro, and sometimes tomatoes.2 Combining these two seasonings for marinating and braising the pork really 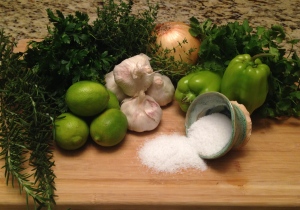 imparts a lot of rich flavor.

I’m already getting hungry for leftovers again, so let’s get to the recipe!

(adapted from Cook’s Country at https://www.cookscountry.com/recipes/7453-pork-pernil)

To make your sofrito mixture, combine 1½ cups of cilantro, the onion, salt, olive oil, garlic, oregano, pepper, cumin, thyme, parsley, and cubanelle and jalapeno peppers in a food processor. Blend well until the sofrito is finely ground. Dry the pork shoulder with paper towels and then spread the sofrito over the entire roast. Marinate in the fridge overnight, or for at least 12 hours for best results. 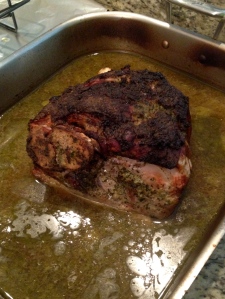 This is just after removing the foil.

Shortly before you are ready to begin cooking, remove the pork from the refrigerator just to take the chill off. Preheat the oven to 450 degrees and pour 8 cups of water into a large roasting pan. Place the roast skin side down in the pan and cover it tightly with aluminum foil. Roast for 90 minutes. I suggest placing the roast in the lower third of the oven to prevent it from being too close to the heating element–especially in later steps when crisping the skin.

Remove the foil and decrease the oven temperature to 375 degrees. Roast for 2½ hours.

Remove the pan from the oven and prepare your V-rack with nonstick cooking spray. Carefully remove the roast from the pan in one piece (the skin may try to stick to the bottom) and transfer it to the V-rack with the skin side up. Pat the skin dry with paper towels to allow it to begin crisping. Place the V-rack inside the roasting pan with the juices and return to the oven for 1 hour. If the juices in the pan begin to run low, add water as needed. 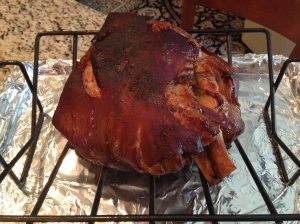 Look at that crispy skin!

Line a large, rimmed baking sheet with foil. Remove the pan from the oven and transfer the pork and the V-rack to the baking sheet. Return the pork to the oven and increase the temperature to 450 degrees. Roast for 15-30 minutes, rotating the sheet halfway through. When it is done, the skin should turn dark brown and make a hollow, crispy noise when tapped with a utensil.

Remove to a carving board and let the pork rest for 30-45 minutes. While the roast is resting, take the juices from the roasting pan and pour them into a fat separator. Let the juices settle for a few minutes and then pour the defatted liquid into a large bowl. 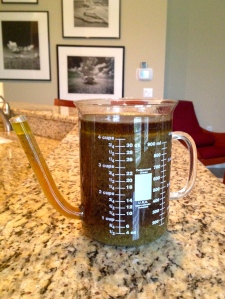 I could drink these juices with a straw.

Add the remaining ½ cup of cilantro (leaves look prettiest added to the sauce) and the lime zest and juice.

Carefully remove the crispy skin from the pork in one piece, and scrape away any large globs of fat from the bottom of the skin. Chop the cracklin into bite-size pieces and set aside on a plate. (Do not let them steam in a bowl or they will get soggy!) Remove the meat from the bone, taking care to discard any excess fat. Chop roughly and add to just enough of the cilantro-lime pan juices to moisten and flavor the meat (about 1 cup). Toss and serve with the crunchy skin on the side. Garnish with wedges of lime. 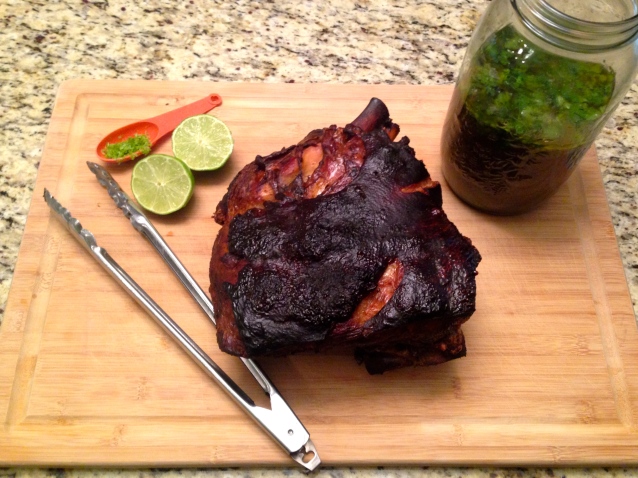 The finished roast along with the cilantro-lime juices. (We over-cooked the skin just slightly)

I am the lady behind the twine. Let's cook, learn, and eat together!

A celebration of all things good

My Meals are on Wheels

Life and Cooking from a Wheelchair

"Life is better than we expected."

Cooking Up The Pantry

Tips for how to budget and live frugally

Protagonist: An advocate or champion for a particular cause or idea